Wretched Sketcher #9: Even the worm dreams of wing

Wretched Sketcher #5: The world is full of marvelo

My lab coat – a visual examination of an archeological artefact

Cleaning the basement, I realized that the paint spotted garment hanging in the workshop was my old lab coat from tech uni, or to be specific: Faculty of Engineering, Lund University.

I have mixed emotions. On the one hand, it really mirrors who I am and what I’ve always been, being relived from the shackles of social expectation. On the other hand, I kept provoking people in these days by not restraining my playfulness and urge to stand out. There were teaching assistants who directly categorized me as the one they needed to put in his place. There were fellow-students who (rightly) thought I wanted to direct too much attention to myself. During some of these occasions, my tender heart stung, and I shed some tears on the Skåne soil. Eventually, I learned to step into line, keeping my impulses down and my mouth shut, dressing according to social expectations. In the mid-nineties, I became an obedient marketing department clone, wearing a tie and jacket every workday. 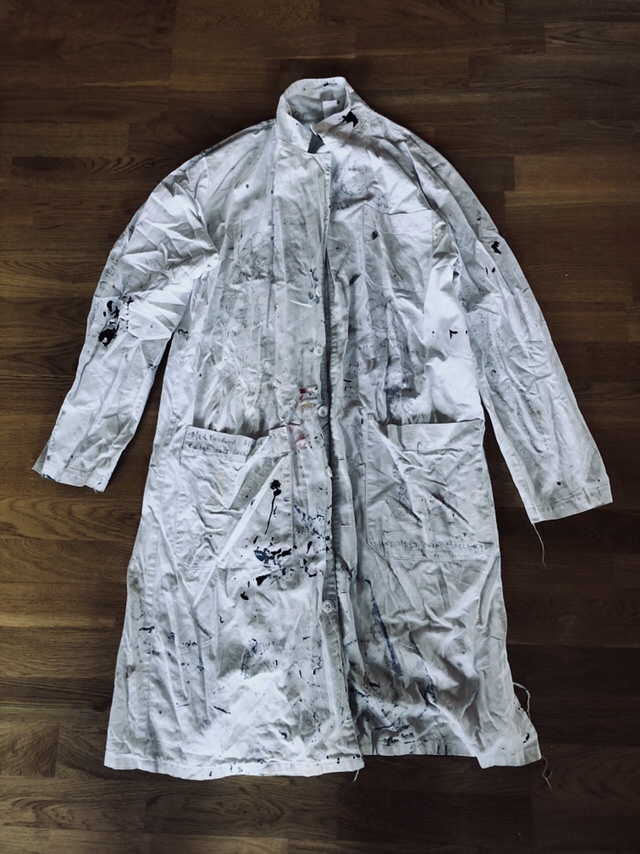 Here it is in all its tarnished glory. Unfortunately, it has taken a spin in the washing machine, and some of the textile grafitti is really hard to read. 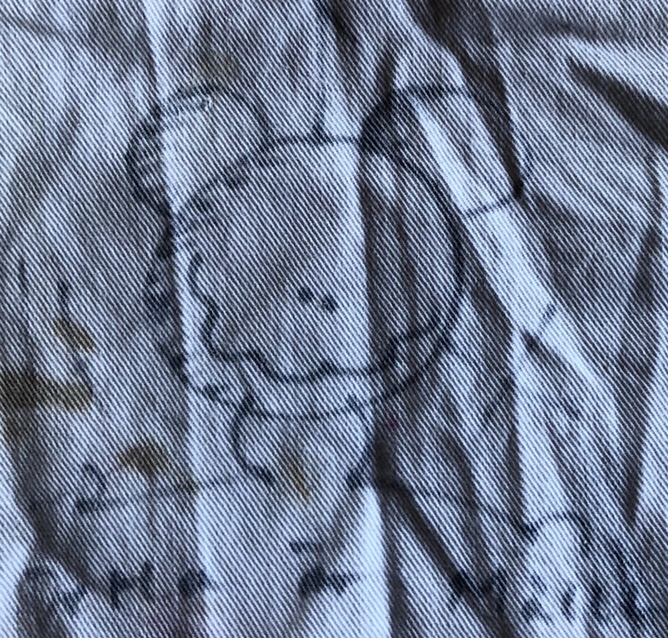 This is my mascot Målltass Mållekyl (a deliberate misspelling of ”Moltas” – a rare Swedish name – and ”molekyl”). As you can see, he is a water molecule. 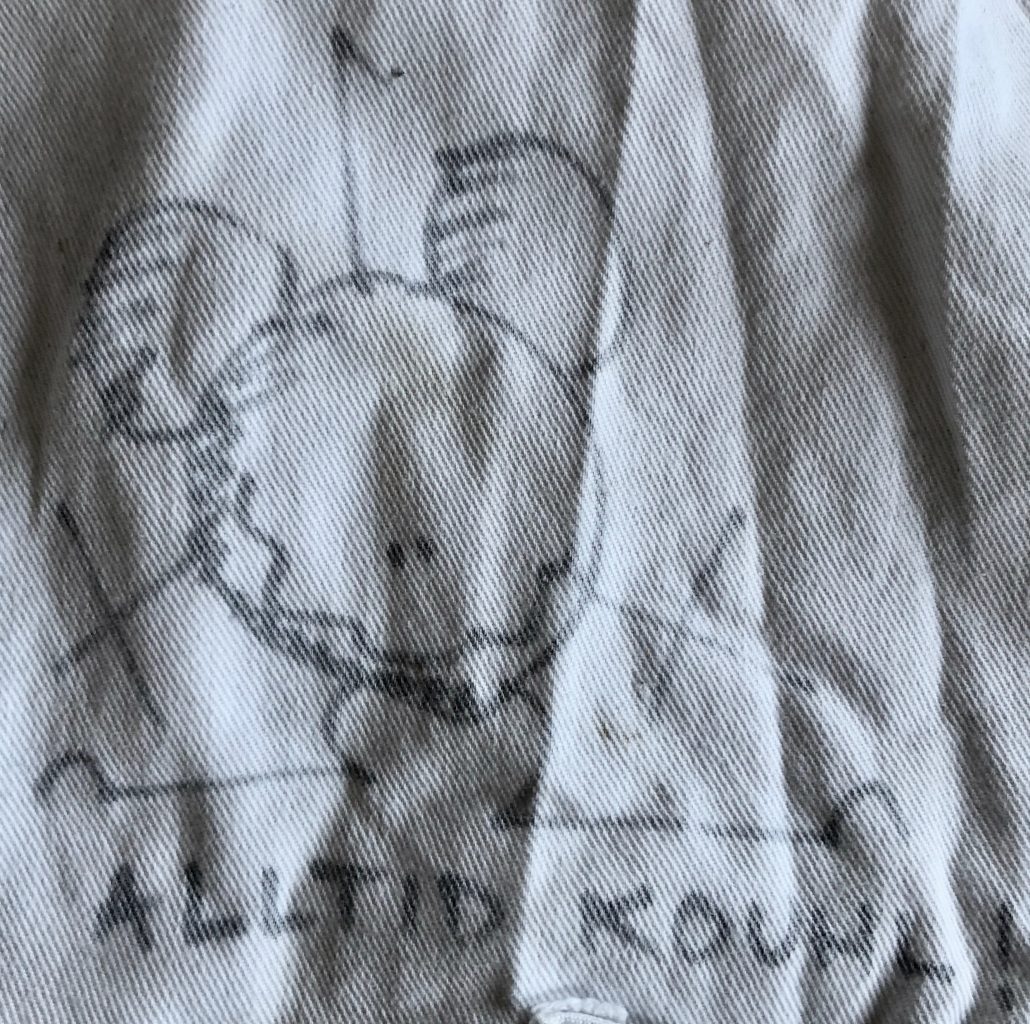 There are actually seven of his kind adorning the lab coat. This says ”Always fun!” (also spelled in a funny way). 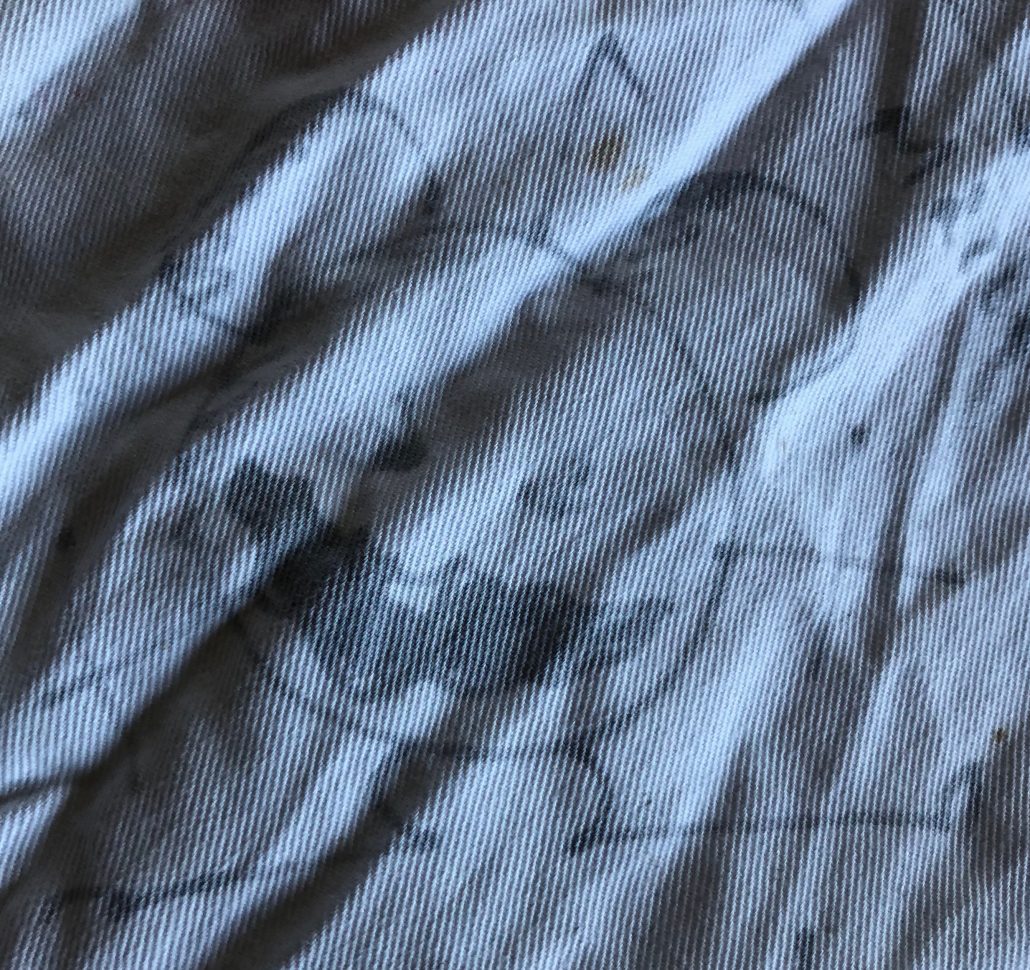 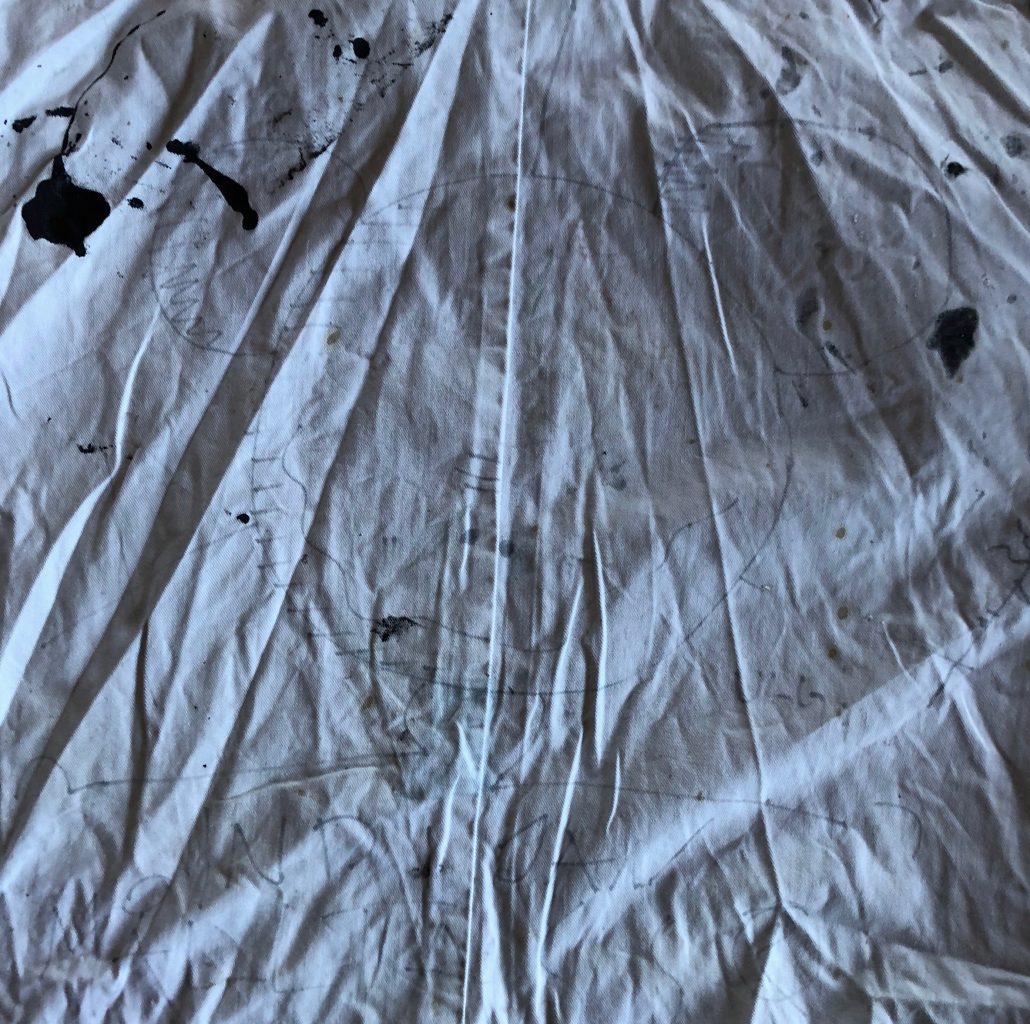 On the back, there is a big Målltass in native American attire (“Indijan-Målltass”). I have no idea why. 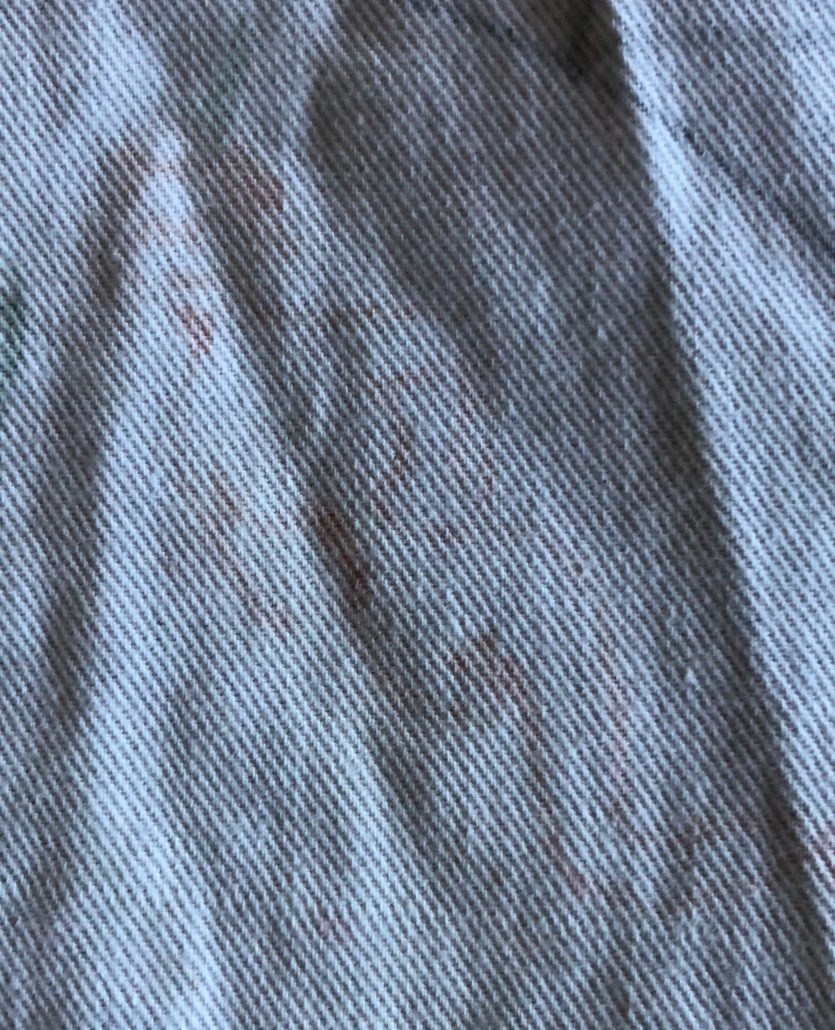 It’s probably only me in the world who can interpret this smudge. The intention is to show what Olle/Indijan-Målltass has on his mind. The person who drew it lives in Australia today.

The Grim Reaper is a taciturn companion on the path of life, yet a bearer of serious advice.

To the Anglo-Saxons, Good Friday was the Long Friday — just as it were for the Swedes. The author Sven Bælter explained why in Historiska anmärkningar om kyrcko-ceremonierna, published in 1762:

‘Where we belong, the day on which Christ suffered is called the Long Friday as that Friday was long and troublesome for our Saviour, and the Mass, just as the Lent, lasted longer than on other days.’

In the symbolic play which is the Easter, the Good Friday has the part of the winter which strips nature of all it’s lavish greenery, forces it to bow with its face to the wet dirt, and live like a frozen and numb beggar for months. Just the kind of degradation that Belisarius, the loyal and most able general of the Byzantine emperor Justinianus, had to suffer from his once trusted master.

Justinianus in the middle and Belisarius to his right (probably). Mosaic in the Basilica of San Vitale in Ravenna.

From a universal point of view, I see the Good Friday as a representation of the yearly, death of Nature. It is the day of all those who need to die to keep the wheels of renewal and resurrection in motion: Jesus, Osiris, Eurydike, Balder … as a matter of fact, we are all a part of this, which is illustrated by this 15th century painting in Härkeberga kyrka, Uppland, by the German painter Albertus Pictor.

This story doesn’t actually has to be about Death and Life. It could as well be about the classic ”from rags to riches” — one of the classic plots of storytelling. Or why not agile development? Choose a random point on the perifery of a wheel; the reason that it moves forward is because the point alternates between crawling in the mud and flying high in the free air. Since Kindergarten we all know that the wheels on the bus go round round round.

As you grow older, you become more and more aware of the universal cyclicity of things–not least in your role as a parent. Recently, I became a great fan of the TV series American Horror story. In one episode the character of Jessica Lange says something like (quoting from memory) ‘When you’re a parent you never lose your beauty, it is only transfered to another person.’ To realise this is like giving Death a Melvin.

Meeting on the timeline.

While assisting your children in exploring the stuff from which the World is woven, experiencing success and failures and conquer the World it is apparent that the moment Now is a moving point on a static timeline. Everything that has been is present in our lifes; we just have to change our focus and adapt the mindset of the Tralfamdorians, as described by Kurt Vonnegut in his novel Slaughterhouse Five.

‘The wind goeth toward the south, and turneth about unto the north; it whirleth about continually, and the wind returneth again according to his circuits.’

‘All the rivers run into the sea; yet the sea is not full; unto the place from whence the rivers come, thither they return again.’

You see, all the answers we need are all there in the Ecclesiasties, just like The Byrds noted half a decade ago!

So what is Holy Saturday, Black Saturday, Easter Eve or whatever you may call it for? Probably to sit in your home, wait for the resurrection of Nature, Jesus, Osiris, Eurydike, Balder or whoever you are waiting for, think thoughts like the ones above and enjoy your newly cleansed heart: Mache dich, mein Herze, rein.

And finally: if you adapt the Tralfamadorian view you realise that it is futile to sit and wait for your time to come. As a matter of fact, it has been there all the time. Happy Easter to you all!

A young man is sitting at a table in the café, wearing a pair of tangerine colored headphones around his neck, reading from a torn leaflet he has found in the pocket of his jacket. At the table in front of him sits a tall elderly man with a computer tablet, his legs crossed and his finger stroking the glass of the tablet again and again. The partially missing header of the leaflet says ”RANGE” and ”AYS” and below is a ski jacket and and some other garments in the hue of newly peeled carrots. The computer tablet shows the homepage of Princeton University where the old man once was in love with a woman that was younger than himself, although he was married t0 the gray-haired woman who now sits down by his table with a newspaper, knowing nothing about his feelings for the other woman who is now a professor at a Dutch university somewhere. The back of the torn leaflet is blank and the young man makes a crumple of it and puts it on the tray beside his tea cup and the paper sleeve of an Earl Grey teabag. From the pocket in his jacket a business card falls out with the pumpkin colored logo of a hotel where the elder couple once stayed during a weekend journey to the city where the young man lives.

Forty years ago, my grandmother died

As a mother, my maternal Grandmother felt obliged to maintain a certain degree of dignity in front of her acquaintances in the urban middle class of Helsingborg – a mid-sized Swedish market town which faces Hamlet’s Helsingør across the Öresund. As a grandmother, however, she threw all these inhibiting ambitions aside and adopted her role as a family senior whole-heartedly. I remember her as a fun and intelligent person who always granted our wishes for Christmas and birthdays.

Eva Huldt, as she was called, was born into another Sweden – an somewhat stiff but extremely tidy and reliable Sweden, and she never had to see it wither into what we see before us today. She would have been very confused by the ignorance of the media, the indifference among people and the cynical and exhibitionistic sides of our internet based culture. She would also be worried that the world disasters of her early life are in the process of being neglected or reinterpreted by the young.

Look into her beautiful eyes – there is an innocence and trustworthiness there which may teach us something.

Wretched Sketcher #9: Even the worm dreams of wing

Wretched Sketcher #5: The world is full of marvelo

About the Helluva Man

I’m Olle Bergman, a Swedish writer and jack of many trades – hence the (very self-ironic) name of this website (En djefla man som man göra många konster => ‘A Helluva Man who has a whole bag of tricks’).